HelpSign In
Turn on suggestions
Auto-suggest helps you quickly narrow down your search results by suggesting possible matches as you type.
Showing results for
Search instead for
Did you mean:
Ask a question

The Authorize.Net .NET SDK for AIM

Rather than drag you through pre-amble, here's all you need to do to charge your customers:

This is a console application - and it's showing you how Authorize.Net's Advanced Integration Method (or AIM) works. I managed to get the meat of the transaction complete in 3 lines of code - pretty slick if you ask me!

Payment system SDKs and sample code usually don't take testing into account and Authorize.Net has changed that. No one likes how invasive gateway code can be - the good news is that this has been changed.

There are 3 core interfaces that you work against - only one that you need to know about (the gateway itself). The first is IGateway:

The essential flow is:

It's easy to get into a situation where you have a neat idea and you crack out a simple API - but as you start adding changes and permutations to it, the API turns into overload oatmeal (see HtmlHelpers for ASP.NET MVC). The good news is that with the new SDK - you can get around this with fluent interfaces - when you create a Request object you only pass in the core of what's needed. In the first code example (which is the largest signature) you pass in the card number, expiration, card code, and an optional description.

The Authorize.Net API can handle a lot more than that, however. If you have fraud protection or address verification you also have to pass in additional information about the user (name, address, etc). That doesn't belong in an overload - that belongs in a fluent interface that you can tack on as needed:

Payment systems are moving more and more into "helping" the developer deal with the core of the transaction as well as make life simple for them when it comes to markup and other things. This is one great thing about the Helpers that come with Authorize.Net's SDK (currently they only work for ASP.NET MVC as extensions to HtmlHelper).

Tired of writing up the same checkout stuff? Me too. Here are some helpers for you that are specifically designed to work with some love on the backend:

Here's what they look like (from the sample app that ships with the SDK - which is an ASP.NET MVC 1.0 app)

There's also a set of helpers for the controller so you can receive and load a request based on a form post. Here's a sample post receiver that sends the request off to Authorize.Net:

One thing with the above is the "naked" reading of variables from a form POST. Usually not a good idea due to spoofing and POST overloading. In this case, however, the read is going against the API - and no other values can be passed in as the reader is checking against another handy helper: ApiFields

The core of the Authorize.Net API is a Key/Value POST with a set of well-defined keys for the API. When I've worked with Authorize.Net in the past, I used to have the PDF open on one monitor with all the key definitions, and my code on the other. This handy helper allows you to work with readable properties on an object - you can use them in naming your inputs and other things.

All of the fields, and the documentation, are popped into a reference class:

If you don't like using Helpers, or if you're using ASP.NET WebForms, you can use ApiFields to set the name of your inputs. The FormReaders above look for these names (I tried to keep it all consistent and non-surprising). So you can do something like this:

You can see all of this lovely stuff in action in the sample application included with the SDK download (CoffeeShop). It's ASP.NET MVC 1.0 so it works on Mono - the entire SDK works with Mono!

robconery is a guest contributor for Authorize.Net 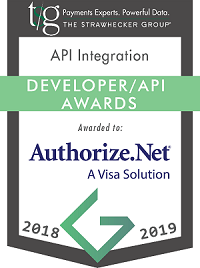