HelpSign In
Turn on suggestions
Auto-suggest helps you quickly narrow down your search results by suggesting possible matches as you type.
Showing results for
Search instead for
Did you mean:
Ask a question
Options
Options

I have discovered a bug in the Accept Hosted payment form related to Safari browser auto-fill.

When the user selects a browser-suggested auto-fill value on a billing input in the form, the auto-fill value visually appears in its entirety in the input, but only the portion of the value that was manually typed into the input by the user is submitted to the gateway.

To Reproduce: Type a portion of a phone number, such as '918', into the phone number input, then select a complete phone number from Safari's auto-completion suggestions. Visually confirm that the full number appears in the field. Submit the form. (Obviously, you must have previously submitted a 918 phone number for the browser to make suggestions for that area code.)

Result: The complete phone number will appear in the input, but only the manually-typed '918' will be submitted to the gateway.

I have reproduced this issue on the billing address field, as well. For example, in the following screenshot, selecting any of the auto-fill address values will populate the address field, but only '11' will be submitted to the gateway: 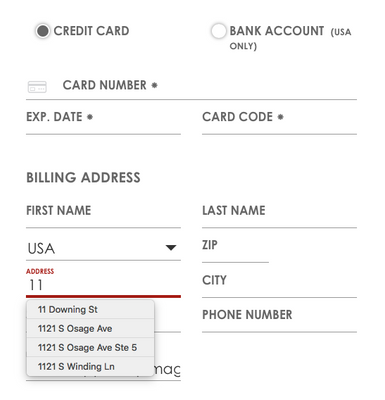 Interestingly, I see that the inputs do not appear to have "value" attributes, which likely contributes to the issue. (I'm guessing that the values are transferred to some other element based on key strokes.)

I am testing in Safari 11.1.2 on a Mac. I was not able to immediately reproduce the problem in Firefox and have not tested in any other browsers yet. I have only tested in the Sandbox at this time.